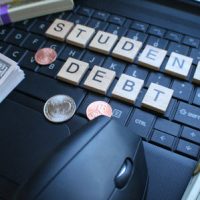 College is expensive. And, like medical care, the cost never seems to go down. If you are planning to go to college, or if you have a child who is about to leave the nest, you need to carefully review each prospective college default rate. This is the percentage of students who take out student loans who cannot pay them back, resulting in default.

The unfortunate reality is that the current bankruptcy code makes discharging student loans almost impossible. For this reason, choosing the right college that gives you (or your child) a chance to repay your loans is vital.

The Department of Education keeps a database which lists the Cohort Default Rate (CDR) for all colleges and universities. This rate represents the percentage of students entering repayment on student loans who defaulted within a three-year period.

For example, if a student entered repayment in January 2015, they will be counted in the CDR if they defaulted at any time before January 2018. If they default after that, they are not counted.

CDR is imperfect, but it gives you a general sense of how well a college’s graduates are repaying loans. Generally, the first three years are the lowest-earning years for a new graduate, so most difficulty repaying loans should happen during that window.

Ideally, the government wants schools to have a rate below 30%. If a school is over 30% all three years, or over 40% in one year, they can get in trouble. As punishment, the federal government can refuse to lend their students loans and set other onerous requirements.

The current average CDR for all schools is 0.8%. Anything too high above that rate should raise red flags. For example, a school with a CDR of 25% might be below the federal government’s guideline of 30%, but it still has a much higher default rate than the average school.

A recent U.S. News & World Report article encourages students to look at each school’s average earnings, claiming this number is often more important than the default rate. We agree that average earnings is an important data point, but it does not exist in isolation.

If a school has high average earnings but a high CDR, something is clearly wrong. Students earning a high salary should be able to pay back their loans. In many cases, the school might be outrageously expensive, requiring large student loans to pay tuition and living expenses. You should know this before sending in your seat deposit.

Bankruptcy Will Not Come to the Rescue

If you take out mammoth loans but cannot pay them back, you can just file for bankruptcy, right? Wrong! Changes to the bankruptcy code have made it much harder to discharge student loans.

To succeed, debtors will need to prove that their loans represent an “undue hardship.” This is a very high standard, typically, and often requires that borrowers be disabled and unable to work. Not all bankruptcy judges are the same, and some will be more lenient than others. But few debtors have managed to discharge their student loans, and students should not expect this to be an option without a significant change in federal law.

If you are facing financial difficulties, you need to be proactive. Schedule a consultation with an attorney at Nowack & Olson in Plantation today. You have many options and need to fully understand them before making a choice.