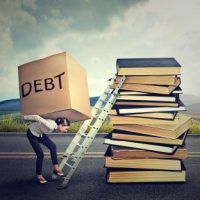 Being honest with your spouse about your financial situation, including your debts, before you get married, is a good way to ensure a strong marriage.  Some couples decide, based on their premarital conversations about finances, to merge their assets and their debts as much as possible, while others decide that the best way to prevent conflicts over money if for each spouse to hold the other harmless about debts incurred before the marriage, which in practice means keeping some of their financial obligations separate.  If you and your spouse have been married for a long time, you have probably seen debts come and go.  For example, you are probably no longer on the hook for every home mortgage and every car loan you ever signed for, but student loan debt has a way of promising to stick around forever, despite the fact that the federal government is considering several ways to make student loan forgiveness simpler for many borrowers.  Making your student loans disappear is no simple task, but a Jupiter debt consolidation lawyer can help you get rid of other debts, freeing up funds to deal with your student loans.

Student Loans Are a Stubborn Problem, but a Debt Lawyer Can Help

Federal student loan servicers allow married couples where both spouses have taken out student loans to consolidate the two loans, in other words, to merge them, so that when the loan enters repayment, the couple can just make one payment.  According to Business Insider, more than 26,000 couples have merged their student loans, but only 776 of those loans are currently in repayment.  The report did not specify the status of the loans that are not in repayment, but some of them may have been repaid in full, while payments may not yet have come due on the others, because one or both spouses are still in school.

The trouble with merging your loan with your spouse’s loan is that it makes the difficult process of seeking loan forgiveness even more difficult.  Specifically, married people with merged loans face an additional obstacle to participating in the Public Service Loan Forgiveness (PSLF) program.  PSLF enables borrowers who work in public service professions to get their loan balances forgiven after they keep up with their payments for ten years.  If your loan is merged with your spouse’s, you must separate the loans in order to become eligible for PSLF; the trouble is that separating loans after merging them is almost impossible, even if you divorce.  This means that you are probably stuck with your student loan, at least until the law changes, but consolidating your other debts can make life easier.

Working as a team with your spouse to tackle your family’s debts is admirable, but sometimes you need a lawyer’s help to make a major dent in your debt.  A South Florida debt lawyer can help you find a way to consolidate or settle your other debts, even if it is almost impossible to make student loan debt disappear.  Contact Nowack & Olson, PLLC in Boca Raton, Florida to discuss your case.