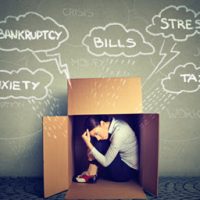 Fox News reports that Paul Teutul, the star of American Chopper, might have his bankruptcy case dismissed by the trustee. According to court documents filed in mid-April, Teutul allegedly has not supplied the trustee with certain requested documents, and, as a result, could lose bankruptcy protection and be denied a discharge of his debts.

Tax Returns and Other Problems

According to the trustee, Teutul has not provided a copy of his tax returns from the past two years. He also has submitted a current budget that shows he has negative cash flow, meaning his expenses exceed his income.

The negative cash flow is a problem because Teutul has filed for Chapter 13 protection. Under a Chapter 13, the debtor does not receive a swift discharge of their debts. Instead, they must make regular payments for 3 to 5 years. These payments will help pay down debt owed to unsecured creditors. Only at the end of the payment period can the debtor have any remaining qualifying debt discharged.

If Teutul is currently unable to pay his bills, then he will not have any discretionary income to contribute to his unsecured creditors each month. Because of this, it is unrealistic to expect him to stick to a payment plan or for his creditors to receive any of the money they are owed.

Trying to Sell His House

The trustee told the court that Teutul is planning on selling his house and using the money from the sale to make payments to his creditors. Teutul lives at a rustic country estate in Montgomery, New York, which is a convenient 2 hours away from downtown New York City and boasts a pool, volleyball court, and a gigantic garage. According to Page Six, Teutul listed the house for $2.89 million in late 2017 but has since slashed the price to only $1.65 million. However, the house remains unsold nearly 2 years after first being listed.

It isn’t clear why Teutul chose to file for Chapter 13 protection instead of Chapter 7. He might have lost his house in a Chapter 7; but he apparently doesn’t care, since he put it on the market before even filing for bankruptcy. Had he filed for Chapter 7 protection, Teutul would have seen his debts discharged by now. Of course, he might not be fully committed to selling the house, which could be what has alarmed the trustee.

If you are struggling to stay on your feet financially, then filing for bankruptcy might be the right step for you. At Nowack & Olson, our Plantation bankruptcy attorneys have helped countless people in the South Florida region climb out of debt.

We will gladly meet with you to discuss your options and whether bankruptcy is right for you. For more information, please schedule a confidential case assessment by calling 888-813-4737.