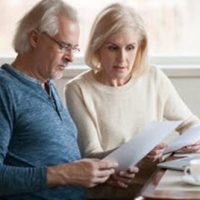 No one wants to file for bankruptcy, especially when they have already reached a point in life where they thought they would be financially stable. However, the reality is that things sometimes happen later in life that cause us to get behind in ways we never thought we would. In this context, bankruptcy can become not only a possibility but even the most favorable solution.

Seniors in particular can find themselves in a position of having incurred debt they cannot pay after retirement without the cash flow they once had coming in from a previous full time job. According to statistics published by Experian, despite senior citizens (people over 60 in this case) having an average FICO® Score of approximately 44 points higher than the national average, they also carry an average of approximately $70,633 in total debt. A publication by the Federal Reserve Bank of New York is even more disturbing with the results indicating that total debt for Americans over age 70 increased over 500 percent in the twenty years between 1999 and 2019. Once you recognize that this debt increase represents the largest percentage increase for any age group during that period, it becomes clear that in certain cases, filing for bankruptcy as a senior citizen may be the best choice.

Special Considerations for Seniors and Bankruptcy

Initially, it should be understood that there is no legal age limit or cutoff point when it comes to filing for bankruptcy. In contrast, the concept that bankruptcy is not a good option for senior citizens arises from the idea that this process is not appropriate for people who have reached certain phases in life. In some circumstances, this concept is true as some senior citizens are what is known as being “judgment proof”. This means that they lack assets beyond the bare necessities which could be seized by a creditor for repayment. Put more simply, many seniors who are under financial strain but choose not to go through with bankruptcy make that decision because they can’t be pursued for repayment of their debts regardless.

Making the Right Bankruptcy Choice for You

Every situation is not created equal and in some cases, bankruptcy and other debt solutions can assist seniors who are struggling financially to regain control of their lives. Depending on your circumstances, you should consider possible alternatives to bankruptcy. However, bankruptcy may still be the best option if you have found yourself being harassed by creditors after incurring substantial amounts of debt and have little to no income coming in.

We Can Help You Figure Out Your Best Option

While bankruptcy isn’t the end of the world for senior citizens, understanding the bankruptcy process can be pretty confusing at first. The best way to start a bankruptcy should always be to meet with an experienced bankruptcy lawyer for a no-obligation complimentary initial consultation to discuss your specific situation. As the Plantation bankruptcy attorneys at Nowack & Olson, PLLC, we are committed to helping seniors shift from simply barely making ends meet to resetting their credit and financial situation in a way that could change things for the better for the rest of their lives. Whether you simply need some advice or have decided you want to get the ball rolling with filing for bankruptcy, we are available to discuss your case as soon as you get in touch with us for a free consultation.