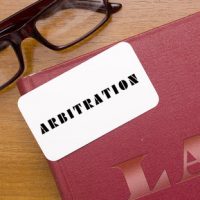 If you have a contract, chances are you also have an arbitration agreement. Arbitration is an alternative dispute resolution technique (ADR, for short) that can keep you out of the courtroom. Instead, you will present your case behind closed doors to one or more arbitrators who act as judges.

Facts of the Dispute

Soldon Winton filed for bankruptcy on May 6, 2016 and received his Chapter 7 discharge in November of that year. Sometime in 2018 he obtained a credit report and noted that his debts for three credit cards continued to show up on the report without any notation that they had been discharged in bankruptcy. Winton then went through the normal channels for disputing erroneous items on a credit report, but the three banks did not correct the information.

Winton then took the next logical step: he filed a lawsuit under the Fair Credit Report Act against the three banks for continuing to report incorrect information on his report. The three banks filed a motion to compel arbitration, pointing to language in their agreements with Winton that gave them a right to use arbitration to settle this type of dispute.

Winton had argued that his agreements with the three banks were unenforceable after the bankruptcy proceeding. His theory was that the bankruptcy discharged not only the sums of money owed to his creditors but also all obligations under the contracts he had with them.

The district court judge disagreed. Noting that bankruptcy only discharges a person’s personal liability on a debt, the judge also found that the banks were not trying to collect on the debt but instead were trying to merely enforce an arbitration agreement. The judge therefore disagreed with the theory that a bankruptcy discharges all obligations under a contract. The judge granted the banks’ motion to compel arbitration, which is where this case will be resolved.

Reviewing Contracts after a Bankruptcy

Before filing for bankruptcy, you should read your contracts with your creditors to better understand your rights and obligations. As this case demonstrates, any future dispute you have with a creditor could be sent to arbitration if an arbitration agreement was included in the contract. Bankruptcy does not “tear up” your contract, and you might have continuing obligations that you should be aware of.

Nowack & Olson has been helping the South Florida community for several decades. If you want to discuss whether a bankruptcy is right for you or your business, give us a call at 888-813-4737. Our Plantation bankruptcy attorneys offer a free consultation to those who are interested.