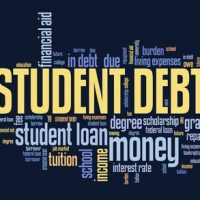 Student loan debt is a ticking time bomb in the U.S. According to Student Loan Hero, Americans currently owe $1.5 trillion in student loans, larger than all outstanding credit card debt. Millions of Americans are saddled with tens of thousands of dollars in loans—and possibly more. Although the economy continues to improve, there are not as many middle-income jobs as there used to be, and currently over 10% of student loans are delinquent.

If one U.S. Congressman gets his way, discharging student loans in bankruptcy will become easier. However, don’t pop the champagne corks just yet. The loan industry will be sure to gear up and oppose any change.

According to U.S. News & World Report, a Democratic Congressman from Oregon, Peter DeFazio, has introduced The HIGHER ED Act, H.R. 5549, that will change when student loans can be discharged.

Currently, the bankruptcy code allows discharge of student loans only if they cause an “undue hardship.” However, Congress has never defined the term, leaving it to the courts to issue sometimes-conflicting definitions. For its part, the Department of Education believes that the current definition of undue hardship has made it too difficult for people to get loans discharged.

As a result, too many debtors do not include their student loans in their bankruptcy petition and therefore never know if they can get them discharged. Earlier this year, the Department asked for public comment about defining the term.

Under the legislation proposed by Congressman DeFazio, the provision excluding student loans from discharge would be deleted from the bankruptcy code. This is a radical step that could make discharge possible for any borrower who qualifies for bankruptcy.

The Current Test for Undue Hardship

In most courts, a judge will consider three factors to determine whether student loans are an undue hardship and therefore qualify for discharge:

Typically, a borrower needs to show that their student loans have made it almost impossible to support themselves—and that sunnier skies are not on the horizon. For example, a borrower with a disability might qualify if they cannot return to work. Unfortunately, this standard is quite high and has kept countless people from getting their loans wiped out.

Students loans are big money—and one of the largest recipients is the United States government, which collects interest on loans. Lenders are sure to fight any proposed change that reduces their likelihood of receiving payment. Typically, lenders raise concerns that making bankruptcy easier will encourage students to take out loans they don’t need only to default. However, lenders could mitigate this problem more carefully screening applicants.

In any event, the issue of student loans in bankruptcy will continue to gain political traction. If no change is coming soon, one might be just over the horizon.

Crushed by Student Loans? Talk to Us About It

No one should have to live in financial fear. Unfortunately, that is the reality for far too many Floridians burdened down by loans, including student loans. To discuss your options, please contact Nowack & Olson. Our bankruptcy attorneys in Plantation are here to discuss your situation.