Florida Wage Garnishment: As Bad As It Gets 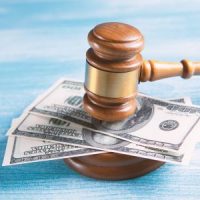 What is the worst kind of attachment?  Is it an email attachment that downloads a virus onto your computer and then proceeds to email it to everyone in your contact list?  Attachment parenting sounds idyllic, but have you ever tried sharing a bed with a newborn that wakes up every hour, demanding to be fed, and a toddler that sleeps parallel to the headboard?  Wage attachment is worse than either of those, because it is the same thing as wage garnishment, and wage garnishment is worse than the garnish which is that piece of parsley on the side of your plate, detracting from your otherwise vegetable-free brunch at Denny’s.  To find out more about wage garnishment and how to stop it from happening to you, contact a Plantation wage garnishment lawyer.

Wage garnishment is the last stage in a years-long ordeal of creditors taking your money if you refuse to pay up; wage garnishment is when they actually take it.  No one has the right to take money out of your bank account or paycheck without your consent; the creditor can only request a garnishment order after they have obtained a judgment against you.  Creditors cannot file a lawsuit and get a judgment until many months have gone by, if not years, without you paying the debt, but they can request a garnishment order almost as soon as the court issues a judgment against you.  Garnishments for unpaid child support or taxes can happen even sooner.

Creditors can garnish up to 25 percent of your disposable income, as long as your income is at least 30 times the federal minimum wage.  The garnishment applies to each paycheck until the debt is repaid in full or 20 years have passed since the garnishment began, whichever happens first.

How to Stop a Wage Garnishment

Once you find out about the wage garnishment order, it is not game over.  It’s time to contact your wage garnishment lawyer and persuade the court that it does not have the right to garnish your pay.  If one of the following applies to you, then you are exempt from wage garnishment:

If you act quickly, your lawyer can help you file a lawsuit that will stop the garnishment of your income.

Declaring bankruptcy before creditors have a chance to get a judgment or garnishment order could be the best solution, and a wage garnishment lawyer can help.  Contact Nowack & Olson, PLLC for a consultation.