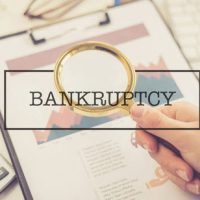 Whenever a debtor files for bankruptcy, the court enters an automatic stay that halts all collection attempts against the debtor, including lawsuits. However, a court can lift the automatic stay if a debtor requests it, which already happened earlier this year when six women obtained permission to go ahead with their lawsuit against Weinstein. Now another alleged victim, Alexandra Canosa, has asked the court to lift the stay—which has prompted a surprising turn of events.

The purpose of a Chapter 11 bankruptcy is to allow the debtor to continue operating while it reorganizes its debts. As part of the reorganization, unsecured creditors might have their claims compromised, meaning they will not receive 100% of what they are owed.

This committee is attempting to prevent Ms. Canosa, a former Weinstein associate, from getting the automatic stay lifted so that she can pursue her sexual harassment claim against him.

The answer is easy: Money.

According to the Hollywood Reporter, TWC’s insurance carrier is not providing a defense in the Canosa litigation. This means that TWC will have to spend its own assets to defend the lawsuit and possibly pay out a settlement or jury award if Ms. Canosa wins her case. Any money spent reduces the amount available to other TWC creditors, including the alleged victims that dominate the official unsecured creditor committee.

Not Enough Money to Go Around

Currently, TWC has assets estimated at nearly $290 million. However, there are many claims against the bankruptcy estate, including claims from secured creditors who have priority over unsecured creditors in a Chapter 11. The estate also has administrative claims, probably legal fees, to help it continue to operate during its bankruptcy.

According to the official unsecured committee, these secured and administrative claims will eat up nearly all the $290 million, leaving them with very little left over for when they sue Weinstein and TWC for harassment and other claims. This case illustrates how Chapter 11 cases often cause a mad scramble by unsecured creditors to protect their access to what little money remains in the bankrupt estate.

The bankruptcy judge in Delaware has not yet ruled on Ms. Canosa’s request to lift the automatic stay. Other litigation against TWC is pending around the country as well as in foreign countries.

Chapter 11 is one of the most complicated bankruptcies, and individuals or businesses seeking protection under this chapter require first-rate legal guidance.

At Nowack & Olson, our team of Plantation bankruptcy lawyers has extensive experience with business bankruptcies and can help guide you through the process. For help, please reach out to us today. You can schedule your free, no obligation consultation by calling 866-907-2970.