How Bad Is It That Credit Card Balances Are 15 Percent Higher Than Last Year? 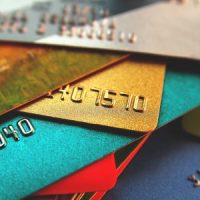 “Pay off your credit card balance in full every month” ranks highly among the most naïve pieces of financial advice most of us have ever heard, right up there with, “If you bring coffee from home instead of stopping at Starbucks on the way to work, soon you will have saved enough money for a down payment on a house,” and “Buy designer clothing that never goes out of style instead of buying new clothes as fashion trends change.”  Most of us do not charge purchases on a credit card if we have enough money in our bank accounts to cover the purchase amount; if we did, we would just pay with a debit card.  You might initially apply for a credit card intending to only use it enough to get certain rewards and then pay off the purchases immediately, but even before the pandemic, most of us were one unexpected expense away from charging our groceries on a credit card.  In our current economic conditions, it is hardly surprising that the nation’s credit card debt has increased 15 percent from where it was this time last year.  If you are struggling with credit card debt and other types of debt, contact a Miami debt lawyer.

According to the Liberty Street Economics blog, published by the Federal Reserve Bank of New York, the increase in the nation’s total credit card debt between the third quarter of 2021 and the third quarter of 2022 is the largest single-year increase on record.  Given that 191 million Americans, well over half the nation’s adults, have at least two credit cards each, it is unsurprising that people’s credit card debt began to pile up as the country’s financial woes persisted even after the stimulus checks and eviction moratoriums ended.  The increase in credit card balances is not evenly distributed among all cardholders, though.

Consumers above the age of 60 reported the lowest increase in credit card debt, whereas working-aged adults took on more debt.  The highest and lowest income quartiles also reported the sharpest increase in credit card purchases.  High income borrowers tend to use credit cards for expenses like travel and dining; these luxuries were unavailable at the height of the pandemic, so spending on them came roaring back after the omicron surge waned.  Meanwhile, people in the lowest income quartile tend to use credit cards to keep utter financial desperation at pay, using their cards for groceries or to make payments on buy now pay later (BNPL) purchases, in order to avoid late fees and being referred to collections.  Credit card debt is not the consumer debt that has increased the most in the past year; thanks to the home-buying boom of 2021, home mortgage debt has increased even more.

A South Florida debt lawyer can help you take charge of your financial situation if your credit card balances spiked during 2022.  Contact Nowack & Olson, PLLC in Plantation, Florida to discuss your case.