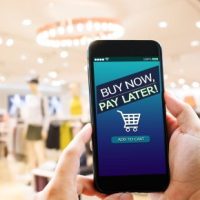 As John Cheese of Cracked pointed out in a series of columns at the beginning of the past decade, being poor is expensive.  If you are rich, you can afford to pay the full amount for a major purchase upfront.  If the purchase is so big that its price exceeds the amount of money you currently have on hand, you can buy it on credit.  The rest of us have limited access to credit, though.  In the old days, layaway was the best option available for paying for consumer goods in installments.  Of course, whereas the wealthy got to take home their expensive purchases immediately and deal with the credit card bills later, members of the layaway classes would see their purchases waiting for them helplessly in store windows until all the installments had been paid.  In recent years, the “buy now pay later” system of commerce has aimed to close the credit gap, allowing consumers who agree to pay for a purchase in installments to take possession of the purchased item before paying any money toward it.  An optimist would see this as a respite from the indignities of layaway, but to a pessimist, it is just another debt trap.  A Jupiter debt lawyer can help you recover from the financial problems caused by buy now pay later purchases.

A Teacher in the Boots of a Starlet Is Still a Teacher: A Florida Story

Lissette Monzon is a teacher in Miami-Dade County.  One day in October 2018, she visited a celebrity news website and saw a picture of Blake Lively wearing mauve Valentino boots in Paris.  Monzon fell in love with the boots at first sight and searched online to see how much they cost, and she found a pair for sale for $700.  Without buy now pay later apps, the story would end here.  Plenty of modestly salaried employees investigate their footwear crushes only to discover quickly that the pulchritudinous kicks are so far outside their price range that it would be pointless even to save up for them.  Thanks to buy now pay later, though, only one click stood between Monzon’s feet and their celebutante boots.

Fortunately, the story of Monzon’s boots has a happy ending.  She paid every installment until the balance had been paid off.  This year, she even went on to buy some Christmas gifts for her family using buy now pay later apps.  Things could have gone differently, though, if an unexpected expense had arisen while she was making payments on the boots.  The bad news is that some buy now pay later services are little better than credit cards, charging interest or late fees if you miss a payment.  If you are already on a tight budget, buy now pay later purchases are risky.

Buy Now Pay Later Is Not a Debt Proof System

At its worst, buy now pay later is just another way of luring people to buy things they cannot afford.  It can make your debt problem worse, but a debt lawyer can help.  Contact Nowack & Olson, PLLC in Jupiter, Florida to discuss your case.