Yikes! Debt Collectors Can Contact You On Social Media 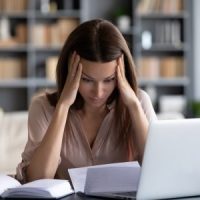 Every school year, schools send newsletters to parents, warning them about cyberbullying and alerting them to how to recognize its signs.  Meanwhile, many adults have a false sense of security regarding social media; they freely revel in the public shaming of other people and assume that they will never be the target, and even if they become a target, how bad can it be?  Being called all kinds of horrible names by someone known to you only by a screen name (often the name of a fictional character from pop culture followed by several digits) can’t possibly be worse from the kinds of abuse that adults face when they answer phone calls or open their snail mail, namely harassment by creditors.  The bad news is that people who are in debt (in other words, almost everyone) are no longer safe from unsolicited communications from debt collectors on social media, but the good news is that there are restrictions on communications by creditors.  The best way to stop creditor harassment in its tracks is to contact a Broward County creditor harassment lawyer.

How Badly Can Creditors Ruin Your Day on Social Media?

In 2020, just as Americans were about to face a year where social media was their main form of communication with the outside world, the Consumer Financial Protection Bureau (CFPB) updated its guidelines on debt collection practices for the first time in 40 years, which makes sense, given how much communications have changed since 1980.  The new 132-page guidelines document specifies the ways in which creditors can communicate with borrowers on social media.

According to the new guidelines, creditors may contact borrowers on social media platforms such as Facebook and Twitter.  They may make an initial connection, such as a new friend request, to verify the borrower’s identity, but after that, they must be forthcoming about the fact that the purpose of the communication is to collect a debt.  They must also be forthcoming about what borrowers can do to opt out of further communications from the creditor.  Social media communications from creditors must not be publicly visible; this would be public shaming, which is against the rules of debt collection.

How to Make Creditor Harassment Go Away

Wouldn’t it be nice if you could just make all those communications from creditors go away, whether by post, email, phone, or social media?  To a great extent, you can.  When you declare bankruptcy, the court imposes an automatic stay, which means that creditors cannot contact you.  Bankruptcy does not make 100 percent of your debt obligations disappear, but it is the closest thing to a wave of a magic wand for making creditor harassment stop.  If friend requests from creditors are putting a damper on the escapism of social media, declaring bankruptcy might be the solution.

A Plantation bankruptcy lawyer can help you get free of creditor harassment, with or without declaring bankruptcy.  Contact Nowack & Olson, PLLC for a consultation.