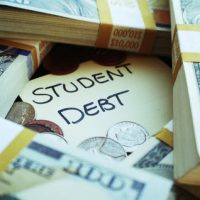 Betsy DeVos is President Trump’s Secretary of Education, so her opinion carries a lot of weight within the Trump Administration. And no educational issue has garnered more attention over the past few years than the high amount of student loan debt that 44 million Americans are carrying. Some sources calculate the total amount of debt is $1.6 trillion.

Unfortunately, student loans are very hard to discharge in bankruptcy proceedings. This did not always used to be the case. However, legal changes in the 1990s and early 2000s have made it almost impossible for distressed debtors to get these loans wiped out.

According to a story in Forbes, those burdened with loans shouldn’t expect changes any time soon from the Trump Administration. Questioned about student loans on Fox News, DeVos called proposals by leading Democratic Party candidates to forgive student loan debt “crazy” and further stated that the burden of paying off the loans would fall on taxpayers.

Far from thinking loan cancellation is crazy, leading candidates for the Democratic Party nomination for President have put forward aggressive plans to allow students to get rid of at least some of their debt load.

Bernie Sanders, for example, wants to cancel all student loan debt, regardless of how much income the person is making. This is by far the most comprehensive debt forgiveness plan ever offered by a Presidential candidate. Sanders’ forgiveness plan would apply to both federal and private loans and would be paid for by a special tax on securities trades.

Elizabeth Warren, by contrast, has offered a slightly less ambitious plan. Her plan would cancel about 95% of all student financial loan debt. Her plan would end up cancelling at least $50,00 in debt for every household that makes less than $100,000 in income. Those who make between $100,000 and $250,000 would also qualify for significant debt cancellation. Warrens’ plan would also not require that students report cancelled debt as income—a current requirement that ends up reducing the savings of those who managed to get debt cancelled.

Currently, those struggling to pay off their loans have a few options:

If you are considering bankruptcy, then it doesn’t hurt to include the loans in your bankruptcy petition. However, a court will want to see that continuing to pay them would constitute an “undue hardship.” In particular, a judge will proof that paying the loans takes up too much of your income and you have little chance of earning more money in the future, possibly because of illness or disability.

To learn more, please contact Nowack & Olson today. Our Plantation bankruptcy attorneys have helped over 20,000 people file for bankruptcy protection. Even if you can’t get loans discharged, you might be able to wipe out other debts, like credit card debt, which can free up money to contribute to loans.